When Techcrunch revealed last night that MS was trying to buy Nook Media, one key detail they mentioned was that Nook Media would get out of ereaders soon and eventually get out of hardware entirely.

I think we could be seeing the second (yes, second) sign of that plan coming to pass. A number of retail chains have recently either put the Nook Touch on clearance or stopped carrying it entirely, and the Nook Glow has similarly vanished from their websites.

The list price on the Nook Touch is $80, and that is in fact what Barnes & Noble is still charging for this 2-year-old ereader. But not all retailers are charging full price.

Last night a reader tipped me to a sale that Radio Shack is having right now (thanks, Fbone). This retailer has marked the Nook Touch down to $20. RS appears to be out of stock in their warehouses, so this offer is good only in stores. But I have confirmed that the NT can still be found in a limited number of stores.

That tip inspired me to check other retailers, and while the clearance sales appear to be limited, Radio Shack isn’t the only one with the Nook Touch on sale. Sears is reportedly selling off their remaining Nook Touch for $30. Multiple reports have indicated that the price was reduced last week in an unannounced sale. I have not been able to confirm this myself but there are reports that the lower price was charged in at least 4 different locations. 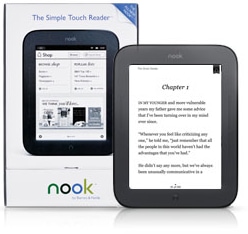 And that’s not all. I checked other retailers and discovered that Walmart is selling the Nook Touch for $60, a 25% markdown from the regular retail. That’s not a clearance, no, but it is an aggressive sale price for a gadget with a razor-thin profit margin.

I have also learned that Office Max seems to have stopped carrying the Nook Touch entirely. This office supply chain still carries the newer Nook HD and Nook HD+, both of which can be bought from the website. But they don’t carry the Nook Touch, and I’m not sure that is a coincidence.

And in case you were wondering, none of those 4 retailers showed any sign of carrying the Nook Glow. I’m not sure if that means they already sold out, but that would certainly be my guess.

I don’t really have much in the way of compelling proof, and it is entirely possible that these chains might simply have decided to stop carrying this model. But if this were a normal stock decision I would have expected the unsold stock to be returned to Nook Media. That is what happened in the Spring of 2012, or so B&N reported in one of their quarterly statements.

Instead the unsold stock is being dumped in the clearance bin, and that suggests that Nook Media doesn’t want the hardware back. They’re not even going to try to sell off the returned stock as refurbs like B&N has done in the past.

On the one hand this should come as no surprise given the age of the Nook Touch, but on the other hand simply clearing out stock is a change from B&N’s past behavior. In the past B&N has continued to sell their older models as new units long after the devices were no longer being made. The original Nook, for example, was still available from B&N well into 2012.

P.S. The first sign that Nook Media was getting out of ereaders is actually the sale that was announced last week in the UK. All Nook hardware was on sale, with the Nook Touch marked down to a ridiculously low £29. That is almost a clearance price, wouldn’t you say?

Infographic: Reading Around the World – What Your Country Says About Your Reading Habits

Hmmmm……..sort of explains the 300K screens made available for use by Kobo ?

Clearancing old inventory to make room for the new. Sounds like something everyone does (even our beloved overlords at Amazon).

Those are great channel checks, Nate. This degree of discounting seems unusual and indicates extreme difficulty in selling the devices. With the cheap tablets now flooding the market and the rate of obsolescence, it’s not a surprise. B&N took a bunch of charges last quarter and my guess is they’ve compensated the retailers so that they don’t have to take back the inventory, since they wouldn’t be able to sell it, anyhow.