Numilog launches French-language ebookstore in the US

English may be the dominant language spoken and read in the US, but Numilog  is betting that there is a market for French ebooks. This French ebook company opened a new ebookstore, eBookezvous, in the US this week, establishing a toehold in a market dominated by Amazon.

Actualitte reports that eBookezvous opened with a limited selection of French and translated works. It’s supported by an Android app, and an iOS app is in the works. The site is also planning to add audiobooks.

Numilog is described as the leading ebook distributor for France, and it has deals with 500 publishers and offers a catalog of 170,000 titles which is distributed through a network of 150 retailers. 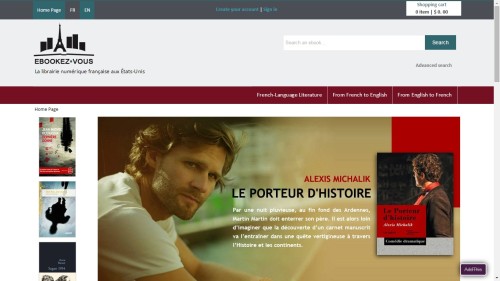 Not being able to read French, I can’t tell you how many titles are offered on Numilog’s new site, but I do know that the new site has its work cut out for it. Both Kindle and Nook have well established French language sections, with the Nook Store carrying a surprising 255 thousand titles to the Kindle Store’s 65 thousand. Both of those stores have an English language interface, while eBookezvous is in French, but I’m not sure that alone is enough to recommend it.

Kindle in Motion: the Good, the Bad, and the Ugly about Amazon’s New Enhanced Format (Screenshots)

To be followed in 6-13 months by: Numilog US Site Closes Down

Unless this is a way to sell French language books to people in France without attracting the European VAT and the French fixed pricing (if France fixes prices).

That’s a pretty good idea, except I’m pretty sure US retailers have to collect VAT anyway. And France’s tax collectors are capable of reaching the same conclusion, so a French company would be watched like a hawk just to make sure they didn’t try it..

I’m pretty sure that US Retailers don’t have to collect European VAT.

They don’t even have to collect sales tax from other states, much less another country.

And I’m sure the corporate can be structured on such a way to avoid this, if necessary.