announced on Friday that the Tegra Note 7, the cutting edge slate which Nvidia launched in September, will soon be available with a 4G chip.

The new Tegra Note 7 LTE is expected to ship next quarter, and will retail for $299, or about $100 more than Wifi-only model. The new tablet is going to feature the same speedy CPU, decent screen, and stylus as on the cheaper model, which coincidentally is also going to gain new partners next quarter.

The Tegra Note 7 LTE will feature the 7″ 1280 x 800 resolution display, and it’s going to be running an optimized version of Android 4.4.2 KitKat on Nvidia’s own Tegra 4 quad-core CPU, with a 72-core GPU. It has a 5MP rear camera, a VGA camera, 16GB of storage, 2 front-facing speakers, and of course the specially developed stylus.

That stylus is probably this tablet’s strongest selling point; the same cannot be said about the construction or overall build quality, which many reviewers found lacking. 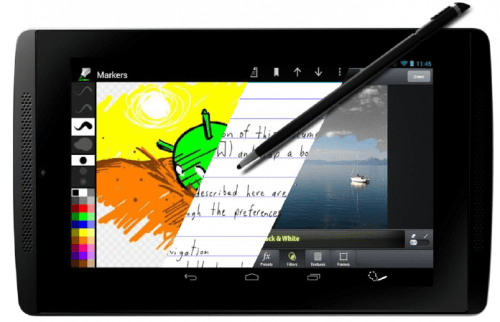 The tablet will ship in 2 different LTE flavors (for the US and Europe) as well as a 3G version for regions that lack an LTE network. In the US it will be carried by EVGA, and in the rest of the world you’ll be able to find it under different brands. Check the Nvidia blog for more details on that point.