The Old Reader Launches Premium Service, Will Require Some Users to Pay

been a tumultuous time in the news reader market ever since Google announced they were shutting down Google Reader.

Many companies, including some surprise entries like Digg, Zite, and AOL jumped into the market. Feedly seems to have picked up most of the former Google Reader users, while many smaller services thrived once they were out of of Google Reader’s shadow.

And then there was The Old Reader, which had more customers than it could handle. In the space of 5 months its userbase grew by a factor of40, driving its developers to announce an imminent shutdown. This was averted when they sold the service a few days later, with the new management promising to keep the lights on.

The Old Reader has continued to chug along, and it has a new business plan today. It’s now a fremium service, which in this case means that you can use it for free if you have fewer than 100 feeds. But if you follow more feeds than that you will have to pay. 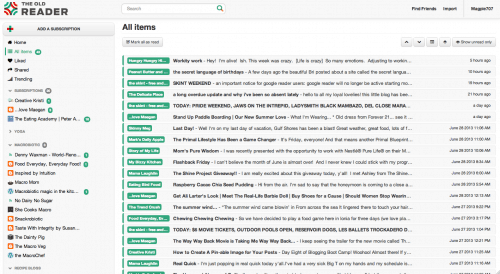 The new paid service will enable users to follow up to 500 feeds. Paying customers will also get a full-text search option, Readability and Instapaper integration (the free service supports Pocket), faster refresh times, and the option of 6 months of post storage.

On the other hand Feedly doesn’t cap the number of feeds at 500, and that service also doesn’t force anyone to pay when they follow more than a certain number of feeds.

The Old Reader reported in their blog post that 90% of users will be unaffected by the 100 feed cap on free users; everyone else is going to have to either pare back the number of feeds they follow or cough up some money.

And then there are the handful of users, me for example, who are going to be excluded. I follow close to 1,900 feeds, which is a little more than The Old Reader’s upper limit. That limit is fine by me, because I’m quite happy with paying for BazQux, which only costs $9 per year.

Of the nearly 2 dozen Google Reader alternatives I tried last year, I think it is the best. And if you’re looking for a recommendation, I have also heard nice things about InoReader.

How to Open a New Book: Infographic

[…] did launch a premium offering last February. They can try to make the premium service more attractive, but as we can see from Feedly that […]