PopSlate was the first companies to announce a smartphone case with an E-ink screen when their IndieGogo project went live last December, and they are back again today with a new(?) case.

This time around they are showing off an iPhone 5 case which replaces the E-ink screen with a Plastic Logic screen. Like the older case, the new case has a screen that promises to offer an ereader like reading experience with a low-power, sunlight-readable display, only now the case works with the iPhone 5S as well as the iPhone 5.

In combination with the PopSlate app, users can customize their case with the images they love, create dashboards with the information they need, and use their favorite apps in an entirely new, at-a-glance, context-aware manner. PopSlate is also working with leading artists to create dynamic content channels, so users can ‘pop’ a myriad of stunning images to the backs of their phones. And thanks to Plastic Logic’s proprietary tech, the new case should prove to be more rugged than the old. 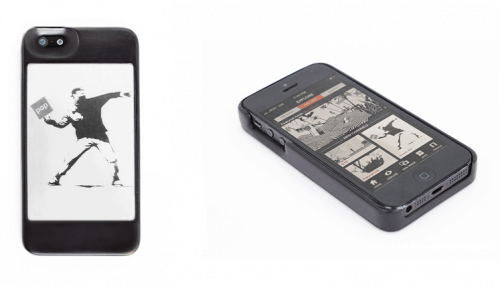 But is this actually a new case?

As you probably recall, PopSlate announced a case last November (and pre-sold a couple hundred thousand via IndieGogo), but as I look over their website I do not see any sign that that older case was ever shipped. I also can’t recall any hands-on reports for this case, and that again makes me wonder whether it really shipped.

It’s not clear to me whether the case shown off today is the same case with an updated design or a later model, though I can see that the PopSlate website shows that they only offer a single model which is still up for pre-order today over 9 months after it debuted.

Details are still rather limited on the new(?) case. For example, while it is listed at a pre-order price of $129, I do not see any mention of an expected ship date.

I have reached out to PopSlate for an explanation for these discrepancies, and if they respond I will update this post.

Update: I got a response from PopSlate. This is the same case, and when they launched the IndieGogo project last year they did not yet have a finished design. That’s what they have been doing for the past 10 months:

Product development over the past 9-10 months, which has involved the key partnership with PL, are the fruits of that campaign. Along the way, we radically redesigned the product to have a wireless interface between case and phone, rather than a wired interface through the lightning connector. End result was a much better product, with a longer development timeline as the trade off.  We are bringing this first product to market later this year.

But until I get a better explanation I would not do business with this firm. They’re setting off too many alarm bells. I’m not saying they are cheats, but I am also not convinced that they will ever actually ship a product.
share tweet mail

This is textbook conning via crowdfunding. researching the company, I discovered that the founders of this company are basically full time employees elsewhere (at a company called Proteusdh.com ) and don’t have any time for this project for which hundreds of people have already paid. They have no product at all, just an idea and a non-working prototype which is basially a 3d printed case. At Proteusdh too, they have a rep for tall promises and no deliveries. I got a refund when I found out, but once they run out of money, good luck getting a refund since pafrt of the money has been spent on junkets and other things.

I wouldn’t necessarily call it a con job; there’s more than one reason for this project to fail.

As the saying goes, never ascribe to malice that which can be explained by stupidity.

can you provide some details on how you managed to get the money back? Even if they are not scamming people (and I would not bet so) I’m simply not interested any longer to be connected to these people in any form.

A Singapore company OAXIS is already shipping their version call InkCase since Sep. First version was for Samsung Galaxy Note II and recently for iPhone 5.

Yep. I got one and posted a review on Saturday.

oops didn’t see that .. just saw the top of the thread.

Indiegogo promises refunds to backers whenever the project fails to deliver. You’re more than eligible since the original date promised was many months ago. of course once the company goes bankrupt, you won’t get anything back. You cannot sue them, only the company, and so they’re safe.

Nate, I initially gave them the benefit of doubt just like you are. research them if you can, and you’ll find out that the company is basically 2 people with full time jobs elsewhere with multiple years history of tall promises but too smart to ever get caught. They will find somebody else to tak e the fall as they have multiple times in the past. That is about all I can say on a public forum without giving away my source of info.

judging by the comments on the indigogo website, i’m not the only one who fell for this crowdscamming. is it worth my time to spend 10 hours to chase these guys in court for a few bucks? probably not, and that is what these guys are couting on

[…] debuted smartphone cases that added a secondary E-ink screen to a smartphone (there’s even a failed Indiegogo campaign to produce one). Out of all of those companies, only one has brought a product to market (so […]

Could anybody let us know h0w they managed to get a refund on this? I have tried contacting the people that run popslate and am not getting any responses. It is outrageous that Indiegogo lets such scam artists run campaigns.

I’m still waiting for both a refund and explanation. These Guys Are So Full Of SHIT. I wish I didn’t support the project.

Yashar Behzadi = conman. Greg Moon = conman. If you have any doubts, check out the hundreds of comments by people like me who paid these guys money and cannot even get an email response from them now. By the way, I confirmed that they work full time for Proteus Digital Health (thanks neone) and popslate is just a money making hobby they ran on the side. Never again investing on indiegogo.

I asked for refund and got a reply asking for my PayPal email so I could be sent a refund.
Big shocker, no refund.

I am in disbelief as an original funder of this product that I (we) still have received nothing and cannot even get a response. I have contacted the BBB in San Fran and filed a complaint. I encourage everyone who was ripped off by these two guys to comment so we at least get some justice. They should have their site taken down until they can payback their investors!

[…] two years of waiting, PopSlate announced almost a month ago that they were gearing up to ship the iPhone case which will […]

heyy I wanna ask is there any popslate 2 customer that consider to refund or already canceled order the popslate 2? If you cancel to order is there anybody who already received full refund or not at all?

anyone please I need your info about 'refund'.

I would ask on Indiegogo.