Here’s an Android-based ebook reader which launched in April but only just crossed my desk today. The MultiReader 5364 from Prestigio isn’t going to win any awards, but it does offer another option for Android on E-ink. 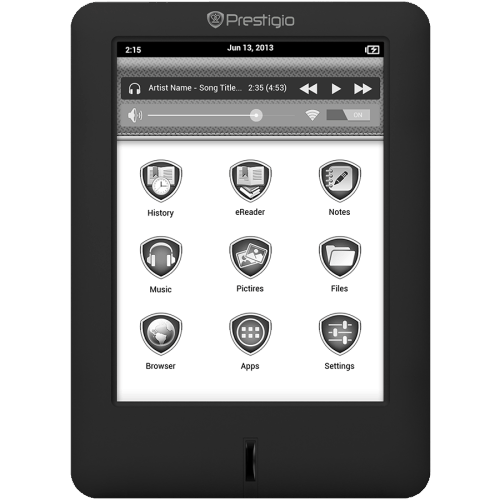 The 5364 sports a 6″ E-ink screen with a screen resolution of 800 x 600, far lower than that of leading ebook readers. It runs Android 4.0 on a 1GHz Allwinner chip with 256MB RAM and 4GB internal storage. Like most ereaders, it has a touchscreen, but I don’t see any mention of a frontlight.

On the plus side, it does boast audio support, and it has speaker.s It also has a g-sensor, a microSD card slot, and a microphone. And Prestigio is honest about the battery life, telling us that the 1.5Ah battery is good for about two weeks run time.

In terms of software, the 5364 ships with a number of Android apps, but I don’t see any mention of Google Play. The listing does say that it ships with a web browser, clock, calculator, a music player, email client, a note-taking app, and several games.

I myself haven’t had a chance to put my hands on one, but I did find the demo video. It’s narrated in Ukrainian, but it is still better than nothing.

The MultiReader 5364 is available direct from Prestigio. It costs 113 euros, which is a little pricy compared to the cost of the Kindle Paperwhite in Europe (109 euros). It’s also price compared to the Illumina HD from Icarus, which at 119 euros is the better buy (based on looking at the specs).

I won’t be buying one; Prestigio will ship anywhere in Europe but the US is not listed as a shipping option, alas.

If you get one, let me know what you think.

Amazon’s Rumored Android-Based Game Console is Likely a Set-Top Box, Not a Console

Predicting the Death of a Media Format