Publishers Dismayed By 25% Increase in eBook Revenues in July 2020

Woe is me, cried the publisher!

The Association of American Publishers announced on Wednesday that publisher revenue was down 9.4% for the month of July, and down 5.8% year to date. The decline is largely the result of steep declines in sales of educational materials for both college and K-12, while at the same time most other segments of the industry have shown surprising resilience in the face of serious supply issues. (Whether that will remain the case as the impact of paper shortages moves down the supply chain is another matter.)

One bright point is that ebook sales have increased by 25% for the month of July,

This is good news for some publishers, just not for those who have spent the past eleven years (since 2009, yes) doing their best to avoid selling ebooks. Those publishers have steadfastly refused to adapt to the market, and will soon be hoist by their own petard.

As Kris Rusch pointed out in her weekly column yesterday, publishers are only just beginning to feel the pain caused by supply chain disruptions. The situation will only get worse as the pandemic drags on, and the publishers who resisted selling ebooks to either consumers or libraries will bear the brunt of financial impact. 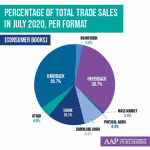 The lock down shut down bookstores and other industries. The resulting hysteria really irritated me. The publishers doubled down on paper and lost fortunes.

Some publishers are publishing ebooks but still nowhere near what it should be.
And they’ll suffer even more.

Since you haven’t been paying attention, it’s the governors, particularly Democrats, who have been shutting down their states, tanking the economy, and refusing to let go until after the election. At least, that’s what Los Angeles County Public Health Director Barbara Ferrer said in a conference call with school officials.

lol what? When the Amazon Kindle was a hit all publishers ran in to digitize their entire back catalogs. There are books available in ebook format that had been out of print for decades. Ebooks represent a good chunk of their revenue stream. Must you distort everything?

Readers still mostly buy physical books. The delicate supply chain was pretty much severed with the pandemic. It hurts publishers, booksellers, libraries and customers alike. This is not the time to wag your finger at the publishers.

They rushed early but in late 2009 they changed their tune and started using different approaches to minimizing ebook sales.
First they tried windowing but that failed so miserably that in three months tbey dropped it. Then they tried collusion to get big pockets Apple to force Amazon to raise prices. Half a billion dollars in fines later, they got Amazon to let them set ebook prices but only by paying Amazon extra for books priced over $12 or so.
That worked, sort-of…

By 2010 BPH ebook sales were over 25% of their revenue and launch window hardcovers were starting to feel the pressure; ebooks weren’t just killing off the mass market paperback as they’d hope but on tbeir way to becoming the dominant distribution format, profit-wise. This was actually a threat to their control of distribution by marginalizing (even more) B&M retail. (By then Borders was in deep trouble. When it went it took 25% of the pbook shelf space.

After six years of high ebook prices the exbook market as a whole has grown enormously, indie books sell more units than the BPHs, romance is about 80% digital, SF over 60%, and mystery around 50%. Relevant to today’s tribal times, 90% or black LitFic is indie. Against that growth, the "big 5" have whittled tbeir ebook revenue down to under 20%. And do note that ebooks deliver about twice the per unit net profit as print. And that was before they raised ebook retail prices.

The BPHs were essentially stagnant before ebooks and have actually been in decline since Agency.
They killed interooerable epub in tbe US and handed tbe market to Amazon on a platter. (With a slight assist from B&N, who squandered a 25% market shard and are down to, maybe, 2%)

CBSViacom saw S&S numbers for last year and put the whole business up for sale.
No takers.

And that was becore the pandemic and the underreported decimation of bookstores.

As KKR said, it is a trainwreck.
And the worst is yet to come.

Addendum:
1- Consumers are doing fine.
2- Smaller publishers that supported ebooks are doing fine, to the extent they were tied to print.
3- Tradpubbed authors are in deep trouble, indies much less so. Some are even seeing boosts.
4- B&M retail employees are getting murdered.

Nobody’s wagging fingers, though; in publishing the pandemic is only accelerating what was going to happen anyway. Sectors that were growing before are now growing faster; sectors in camouflaged decline are now exposed as seriosly unprepared for even a mikd wind, much less the current hurricane.
The world of 2022 is going to be very different from 2019 and not in ways tbe BPHs owners will enjoy. It will be more like 2030 was going to be anyway.

Well, there are those publishing CEOs who outright said they were happy to be selling fewer ebooks than they might. I mean, read the quotes…congratulating themselves on ebooks' declining sales with talk of "equilibrium" and "stabilizing" the market and "preserving a diverse retail landscape."

Strip away the corporate doublespeak and that amounts to, "We’re selling fewer ebooks! Yay for us!"

Ebook sales represent a healthy revenue stream, sure if regard McMillian' policy change for library lending. And that worked so well.

People buy physical because (a) some readers want physical (b) because the book isn’t readily available in ebook(c) because the printed book are sometimes cheaper than the ebook but the price drops even so slowly. And when it does it’s as much as a paperback.

In my case, I prefer ebooks as I simply don’t have space to shelf them.

[…] Publishers Dismayed By 25% Increase in eBook Revenues in July 2020 “The decline is largely the result of steep declines in sales of educational materials for both college and K-12, while at the same time most other segments of the industry have shown surprising resilience…” […]

[…] Publishers Dismayed By 25% Increase in eBook Revenues in July 2020 “The decline is largely the result of steep declines in sales of educational materials for both college and K-12, while at the same time most other segments of the industry have shown surprising resilience…” […]