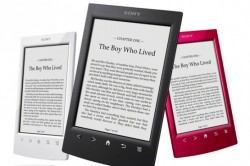 Last weekend I posted a rant about the new Sony Reader and heckled Sony for basically re-releasing the T1 with a matte shell and no audio ability.  At the time I couched my rant with the caveat that some might be interested in the new Evernote or Facebook integration in the T2, which might be enough to make the device worthwhile.

Silly me. I had forgotten that Sony usually hobbles great and wonderful new features on the Sony Reader. They’ve been doing this for at least 3 years now, and it continues today with a limitation on how much you can upload to Evernote. 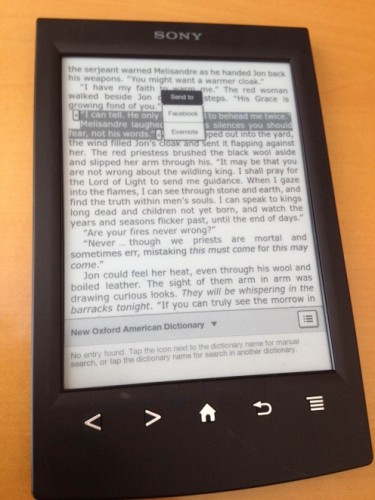 There’s a post over on the Sony blog  from Friday. The post explains how you can use Evernote to upload your notes and highlights. I’m glad I found it (via MobileRead) because it also mentions a restriction which Sony used to limit the usefulness of this feature:

Another scenario: you are reading a really good book on your Reader and want to save some of your favorite passages. Now you can use Evernote to save passages (limit of 140 characters) with notes, and view them later in Evernote on your laptop or desktop.

No, your eyes do not deceive you. That really does say that you can save a tweet’s worth of an excerpt from an ebook to Evernote. Clearly someone at Sony doesn’t realize that the 140 character limit of Twitter is an annoying limitation, not a feature.

And it is also a ridiculous limitation. Books are intended to be long so an idea can be explored in as much detail as needed. There’s no way you can adequately adequately catch all of an idea in 140 characters – not the books I read anyway. I like to read books that are 400, 500, or even 600 pages long, some of which are written by authors who can hit 140 characters before hitting the first verb, much less finishing a thought.

That limitation isn’t enough to convey an idea from a textbook either. I’ve taken classes where the subject title alone can hit 140 characters, much less the explanations for the techniques taught.

I could go on, but I think I’ve made my point.

I suppose that this shouldn’t come as a surprise; Sony has added new features in the past which were secretly hobbled by limitations. I could point out the Android running inside the T1, but to be fair Sony never promised that as a feature.

Sony also never really made a big deal about how you can export annotations from the Sony Reader to the Sony Reader for PC app, though it was mentioned in some stories. They added this option in 2009, and when it works you can get an RTF file containing the highlights, scribbled notes, and typed notes for an ebook. It was a pretty cool feature, or it would be if not for the fact that you couldn’t export highlights from a DRMed ebook. Your notes would come through just fine, and you could do a screen shot, but the text of the highlights could not be exported.

Yes, that kinda sucks the usefulness out of feature, doesn’t it? That’s Sony for you. I never did find out why Sony adds these limitations, but the leading theory is that they don’t want to upset publishers.  By limiting how much copied can be copied out of an ebook Sony manages to sidestep any potential complaint about enabling copyright infringement.

Yes, I do realize how crazy that sounds, but I cannot come up with a better explanation. And given that Evernote will let you upload a 25MB file, I can see how some dunderhead at Sony decided it was necessary to limit users. You kn0w, just in case someone tried to copy an entire ebook into Evernote.

IPG eBooks Are Back in the Kindle Store

It’s particularly silly given that the Kindle lets you highlight whole swaths of books and those highlights are available on your Kindle highlights web page. I find it an extremely useful feature when reading a book I intend to review because I can copy and paste the highlighted passages into my review with no problem.

And so Sony continues their perfect record of not so much *dropping* the ball as "standing around idly scratching themselves while wondering if it might be possible to use their hands to pick up that round thing."

If they’d had their act together six years ago we’d be hearing a lot of people griping about the walled garden of LRX and wishing the Sony used the industry-standard MOBI format instead, and Amazon would be under investigation for colluding with the Big Six publishers in an effort to take Big Bad Monopolist Sony down a peg or two.

When I first heard about this function I thought about Mantano Reader, which would let you backup notes. As it is, it looks like Twitter on Evernote (140 characters?), which is truly a wasted opportunity. No new sony for me…

I have been looking for a feature to read articles/bloggs offline on a ereader.
I was hoping for pocket or instapaper….

But now, how good is the Evernote Clearly?
How dos the offline reading work now?!

Can you download allot of articles to read offline?
Can you write notes on them?

This is a killer feature if it works.
I was thinking about rooting a reader to install some instapaper app….

You can pull content to the Sony Reader from your Evernote account, yes. It downloads as an Epub.

And people wonder why Kindle has most of the market. Their highlights feature with its associated website is a major reason I stick with them. Nook Color and Tablet are similarly hobbled as the Sony. You can highlight and click on share which them emails you the highlighted section except, that it’s a small abbreviated section of what you highlighted (I never counted the characters but it seems a bit longer than the ridiculous tweet limitation.)

I think they have fixed this issue now. Someone was saying that they had uploaded more than 140 characters. I gave it a go and managed a whole paragraph. I am going to see what happens if I just try to upload everything in my notes next. I think that it will work. I hope so as I can see this being a really useful device for academic work on the road. If you cannot upload paragraphs of any length then it is not a great deal of use in that respect. What I would really like would be if there was a footnoting addition that could save in Harvard citation format or OSCOLA. That would be awesome. In fact introducing a number of additional word processing features to the note application would be incredibly useful.