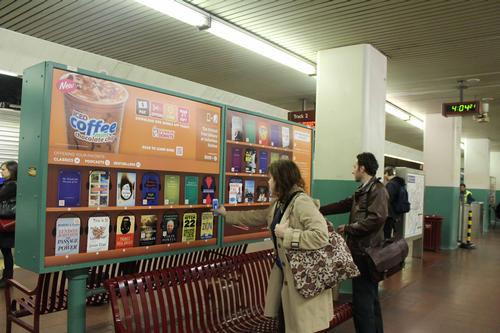 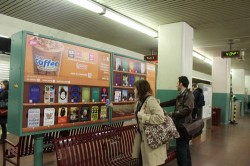 Cities all over the word are discovering that virtual libraries need little physical space, making it possible to place them in locations that would otherwise not be able to hold more than a handful of books. Cities as diverse as Mexico City and Bucharest are putting virtual libraries in transit stations, and earlier this week Philadelphia followed suit.

The Free Library of Philadelphia announced earlier this week that they had installed a virtual library at Suburban Station, a transit station that (in spite of the name) is actually in downtown Philly.

As part of their celebration of National Library Week (14 April to 20 April), more than 70 advertising boards were installed in the station. As you can see from the images at right, the signs are covered with a selection of book covers as well as QR codes that travelers can scan to download ebooks. 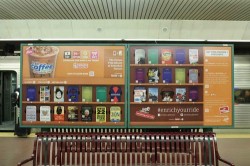 The project was launched by the Free Library in cooperation with their partners SEPTA and Titan, with funding provided by Dunkin’ Donuts. The virtual library is going to be maintained during the month of April. Plans have not yet been made to expand it or keep it running after April is over, though that it under discussion. 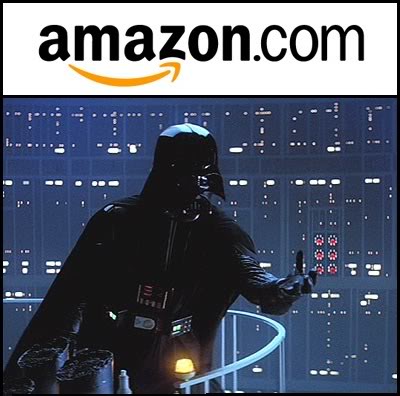 I think this is a great idea, but why put 70 billboards in one station? Why not put 25 or so in each of the three main stations, 30th Street, Suburban, and Market East? Or just scatter them around all the various stations?

I think it’s because SEPTA only offers free Wi-Fi at two stations, one of them being Suburban Station. People with Wi-Fi-only devices can take advantage of the ebook downloads and those concerned about their cellular data cap can do the same over the free connection.

This is an awesome project from the Free Library of Philadelphia. It’s running during April only, but if it does well….

I expect to have an article about it in the next issue of the Marketing Library Services newsletter, written by someone at FLP, to discuss how they planned and promoted the project. If that’s of interest to you, keep an eye on www.infotoday.com/mls

Also, have you heard about the first train station library in the Netherlands? It’s a true library, loaning paper books, but it’s still doing quite well. You can read all about it here: http://www.infotoday.com/mls/jan13/van-Tol–Train-Station-Library-Proves-the-Publicity-Power-of-Remarkable-Projects.shtml
Very cool stuff.

Toronto Public Library's Book Vending Machines Are Like a Better Buggy Whip in the Era of Cars | The Digital Reader September 28, 2016 um 11:47 pm