This time around the reinventor is London-based Visual Editions, which wants to "reimagine what the ebook can be from the ground up". VE announced in April that:

The realm of making digital books that are as playful and immersive as printed books are, is something we’ve been thinking about for a little while now. And we’re ridiculously excited to tell you, at long last, about our latest project Editions at Play, working with Universal Everything and Google’s Creative Lab to create a new space for digital books that couldn’t possibly live in print.

Visual Edition plans to work with Google to launch a new part of the Google Play Store called Editions at Play. It’s expected to launch sometime this fall, and will be "a place to showcase, celebrate, and bring out digital books that are immersive and were written and developed with the idea of being digital".

They don’t have anything to show yet, but they are talking about their goals in lofty terms like their hope that "Editions at Play will have a URL that transports readers to a digital location or even into the real world (well why not?), or chase you across the internet; we imagine digital literature that has no beginning or no end, or landscapes that can travel in any direction or have any number of characters, plots, side plots and inventions".

In short, Visual Editions has discovered the idea of enhanced ebooks, and they plan to fling all sorts of ideas at the wall and see what sticks.

From what I have read VE hasn’t proposed anything that could be called a new idea; it’s all been done before in either enhanced ebooks, apps, websites, games, ebook apps, or some combination thereof, only now the ideas are being flung in the name of improving ebooks.

Sigh. Why do so many outsiders think that ebooks are a broken or incomplete art form?

I am all for someone developing a new way to tell stories; this has led to better story-telling in games and other media. But what I don’t understand is why people keep insisting that their new art form has to replace ebooks.

It’s not just that I like ebooks the way they are, but also that every past effort to reinvent them has failed utterly for the simple reason that readers don’t want something different. They want ebooks as they are.

You can’t fix what isn’t broken, and yet so many people keep trying.

Okay, you can actually do that, but it requires genius on the level of Steve Jobs or Jeff Bezos (surrounded by a lot of other really smart people), and judging by their user-unfriendly and visually ugly website it is clear that the folks at Visual Editions aren’t that smart.

But hey, at least the new attempt will have a pretty logo. (It’s an animated Gif, which by itself is enough to tell you where this project is headed.)

KindleAir.com registered – not gonna be a product 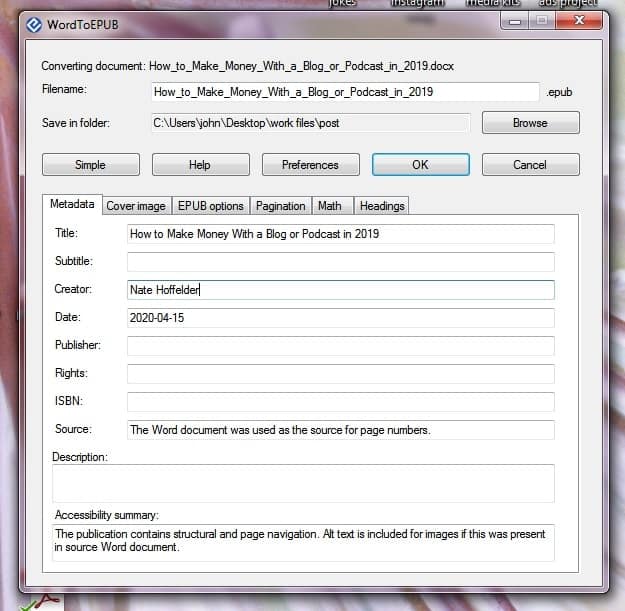 The WordToEpub App Lets You Make Epub 3 eBooks in Windows

Looking forward to clapping my hands and giggling like a three year old while I read my ebook about the economics of European post war steel consolidations.

"Sigh. Why do so many outsiders think that ebooks are a broken or incomplete art form?"

Because the odd ebook they read (a year) when they don’t have connectivity of some kind (in flight, beond the black stump, etc), just lies there and has no interactivity, and they get a brain fart and convince themselves that they’ve discovered something that no one else has.

"But hey, at least the new attempt will have a pretty logo. (It’s an animated Gif, which by itself is enough to tell you where this project is headed.)"

What I don’t understand is why the people who are trying to develop these new ways of telling stories would want to lock themselves into a mental straight jacket before they start by calling their product an "enhanced ebook" and by trying to sell their products to people who like to read traditional books. In my opinion, people who prefer to read a book are NOT likely to be interested in the new features they are trying to program into their storytelling.

All of the wonderful new features that they talk about seem to me to be more related to TV or movie special effects, so why don’t they call it an "enhanced movie" or an "enhanced TV program"? Or why not come up with a distinct and original new name for a new art form?

Actually, somebody has already invented a "new form of storytelling" based on digital technology: the video game industry. Games like KOTOR, JADE EMPIRE, BIOSHOCK, MASS EFFECT, HALO, and many others all tell stories where you are the protagonist and you get the live the story. Some even let you mold the story so that no two "readers" experience quite the same story.

The reason enhanced ebooks fail to take off is because the people interested in that kind of multimedia narrative are already getting it.

See, that’s one of the other things I don’t get about all these reinventors. Most of what they want to do has already been done in other industries; why try to recreate it in the book industry where it’s not wanted?

Because there are venture capitalists waiting to be fleeced?
I also forgot to mention the story games from TELLTALE GAMES, like THE WOLF AMONG US, based on Bill Willingham’s FABLES.
80% story 20% game = 100% fun.

And press willing to write about it.

Well, we started building ebooks in 2010. In five years we have seen "new way to read ebook" aka "the future of digital reading" aka "the future of book" more or less every month. Meanwhile we created ePub2 with non linear reading (from ebook game to hypertext literature), ebook updating themself, EPUB3 in media overlay, jukebooks for create ePub on the fly and more and more… But in on-line world we need "something new" to be shared for some hours.

How many of those features do you use in the ebooks you publish?

"those features". Are you referring to the "non linear reading, ebook updating themself, EPUB3 in media overlay…" et ceterae?

You were typing too fast, methinks. Turn your spellchecker on.
And of it’s not Atavist […]
You meant 'if'.
[…] every past effort tp reinvent them […]
You meant 'to'.

That’s weird. I have a spellchecker, and it usually catches details like that. It didn’t this time.

You’re welcome. Because I’m Autistic I often see little things like that, and I can be nitpicky about them (YMMV).

Me too, it’s just writers can’t see that about their own work right away. It usually takes a few hours before we can see the flaws. And last night I crashed early.

I’ve been waiting for years for the ebook to mark the glorious return of the Choose Your Own Adventure novel. Come on guys. It makes so much sense.

That has actually been done a few times now. Colliloquy tried it as Kindle apps and went nowhere, and I think true CYOA books are now available digitally.

I don’t think they’re in Epub, though.

Nate, the problem with those books is the publisher seems to believe that iOS is the only OS ever developed for smartphones. They’ve completely ignored the existence of Android and Winblows Phone, and I had to contact them about these egregious omissions.

I’m actually trying to do that, but although I can make the necessary XHTML and CSS files for the epub, I have no way to put them together on my Android devices and the only PC I have access to doesn’t allow me to create zip files with no way for me to install the necessary software.

Well, we did this, if you understand italian language.

What? You’re also Autistic or you’re also nitpicky? 😉
BTW, no need to explain. I had already figured that the errors occurred because that type of thing sometimes happens when one is human, and even on a good day I can make mistakes. 🙂

Same difference, Autistic Spectrum = Autistic. The real difference is between Aspie and Autie, and even then there’s more similarities than differences. 🙂

I know aspie is on the spectrum now, yes. I was endeavoring to be more specific.

Technically, Aspies have always been on the Spectrum, but it’s only fairly recently (1994) that you’ve been recognised as such. I apologise for misunderstanding your intention anyway, and thank you for your clarification.

Er, no. The term Autism Spectrum was only invented with one of the recent revisions to the DSM, after which Asperger’s was listed in the same category as autism and several other neurological disorders.

[…] print foundations for what it ambitiously imagines as the next generation in digital book content. Some, however, are skeptical that Editions at Play is much more than the latest chapter in the lackluster history of enhanced […]

[…] print book designers Visual Editions announced their new collaboration with Google last year, they said that Editions at Play would "reimagine what the ebook can be from the ground […]

Google's "Future of the Book" Cannot be Printed, And It Also Cannot Be Viewed on Many Devices | The Digital Reader April 21, 2016 um 1:46 pm

[…] this year the book design firm Visual Editions launched a new program to "reinvent the book". This program, Editions At Play, was developed in partnership with Google, and so far it consists […]