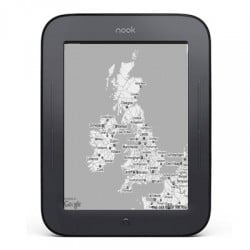 The news this morning that Kobo had hired a new director for EMEA reminded me about some expansion plans from one of their competition. Those plans aren’t going so well.

Way back in June 2012 Barnes & Noble set an ambitious goal. Over the following 12 months, they planned to launch the Nook Store in no less than 10 international markets. It’s now 7 months later, so let’s look at what they’ve accomplished.

In late September 2012, Barnes & Noble launched the Nook Store in the UK. This was a solo launch with no local partner. B&N had been rumored in late 2011 to be courting Waterstones but that bookseller chain ended up signing with Amazon to carry the Kindle.  External details of the deal suggest that Amazon outbid B&N not because Amazon wanted a local partner but to keep B&N from gaining a local partner in the UK market.

And since September B&N has launched the Nook in exactly …  zero markets.

There are rumors of plans to launch the Nook in a variety of markets including Russia, Netherlands, Germany, and elsewhere (I think Brazil is a possibility), but no firm evidence has been uncovered nor has B&N made any announcements.

It’s now late January 2013, and that means Barnes & Noble has only 5 months left until their self-appointed deadline. I’m not sure that they’re going to make it.

I’m not trying to be hostile here, but launching 9 local bookstores is a massive undertaking any way you look at it: logistical, technical, or organizational. It took B&N nearly a year after the first hints about partnering with Waterstones before they launched the Nook in the UK. And even then it was delayed a couple times due to technical issues.

I’m not convinced that B&N has the ability to pull off 9 nearly simultaneous launches in the next 5 months. Sure, they might decide to wait until BEA 2013 comes around in May and announce the markets they will be launching in, but actually getting the local Nook Stores is probably out of the question.

And given the way B&N is hemorrhaging money in the Nook Media and seeing poor retail sales, I’m not sure they can survive a significant delay in their international expansion plans.

It sounds kind of unlikely to me, too; and also, I wonder in how many of these potential markets Kobo and Amazon are already present? In the US, Nook has a greater market share than Kobo because of B&N’s physical presence. However, they don’t have physical stores in other countries, so I wonder how Nook will differentiate itself from Kobo, or Pocketbook.

Have there been any reports on how B&N is doing in England?

The issue isn’t just hardware (and don’t forget SONY–though most people try to) but also ebookstores. Most of their intended markets are places that still believe in "universal epub compatibility" and have lots of small generic Adept ebookstores. Plus Sony and Google, both of which will have higher name recognition among buyers.

So even if Nook hardware sells, it will by no means guarantee Nook ebook sales.
Their most likely source of ebook sales will be Win8 PCs, tablets, and phones.
This they might achieve by setting up a single online site with multiple front ends.
(It’s not as if they’ll have much if any local reviews to differentiate the local ebookstores.)

So it’s doable but hardly earth-shaking if they do.