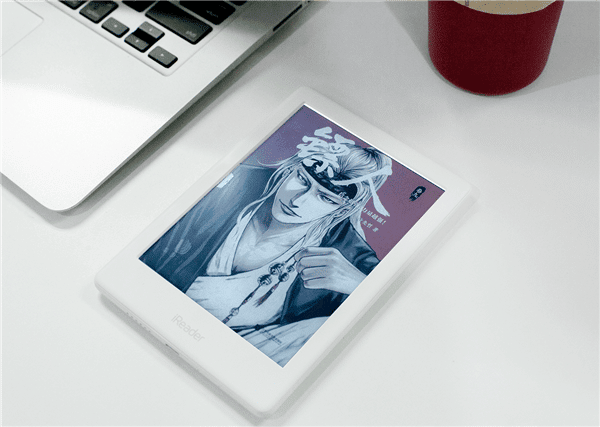 I am still waiting to hear from contacts in China whether this device have actually been released to market, but it would appear that E-ink’s next-gen color epaper screens have arrived on consumer ereaders.

CNTechPost reported earlier this week that the Chinese firm iReader has announced the C6, a 6″ ereader capable of displaying 4096 colors. They don’t mention the price or release date, but Chinese language sources say the device will be released on 25 March, at a retail of 1499 yuan (about $211 USD).

The iReader C6 is powered by a quad-core CPU with 1GB RAM and 15GB internal storage. It also has integrated speakers, a front-lit display, and a capacitive touchscreen.

The product listing says it weighs in at 170 grams and measures 6.9 millimeters thin. This makes it about the same size as most 6″ ereaders, but unlike its competition the C6 has a white shell rather than a black one. That was a wise choice because the white will probably make the color screen look better. (Similarly, most older E-ink ereaders have a black shell instead of a white one because a white shell would make the grayscale screen look grayer, while a black shell makes it look blacker.)

The C6 is not the first color ereader on the market, but it is the first that uses E-ink’s latest color epaper screens. There were several ereaders that used E-ink’s Triton and Triton 2 screens, but that tech was never widely adopted. Triton screens depended on a color filter placed on top of a graysclae E-ink screen and as a result its screen resolution was low and its base color was a dull gray. (It was also slow to refresh.)

We still don’t really know anything about the C6’s performance or screen quality, but I can assure you that I am doing my best to get one.

P.S. If you are wondering what this new screen tech means for the Amazon Kindle, I have a few thoughts.

[…] news breaking that new color ereaders ( the first in nearly seven years) may be shipping later this week in China, now seemed like a good time to start thinking about when those screens might show up on […]

[…] I still don't have any evidence that this ereader is actually available, but it now appears that at least two color ereaders have been announced in China. […]

[…] that it will sport the 4,096 color E-ink screen sported by the two Chinese ereaders announced last month. Coincidentally, neither of those devices have shipped yet, and now I think we know why (the […]