Mashable, ABC News, and a bunch of other sites are all reporting today that Facebook is holding a press event next week. No one has any leaked details yet, but it is more than likely that Facebook’s new product will have something to do with the code references to RSS feeds that showed up yesterday.

I don’t have any inside info either, but I have a couple guesses about the topic of next week’s Facebook event.

Me neither. In fact, I thought the apps had been shut down late last year. But no, they still exist. The hot story of Spring 2012 was Facebook and social reading. Many, many publishers were signing on to create custom social reading apps that handing their readers over to Facebook. Eventually some realized that they were losing out on page views, and dropped out, but there are some social reader apps still functioning.

Based on the coverage of yesterday’s RSS feed story I think most bloggers had forgotten about Facebook’s social reading apps (even Techcrunch failed to make the connection), but as you can see from this page social reading isn’t dead. Facebook is still serving up articles from any number of websites, and they are showing the full article (and not just the excerpt plus link you would see in your timeline). 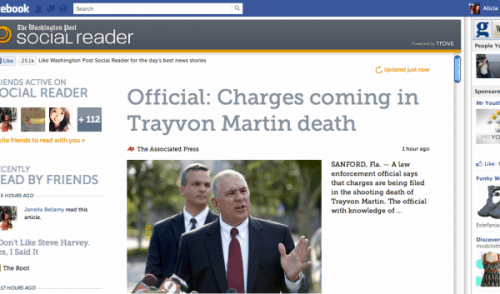 Don’t look now, but those social reading apps are only a half step away from being Zite or Flipboard. Just about the only difference between Facebook’s reading apps and its competition is that Zite and Flipboard pull content from the web; Facebook looks to be still set up to only display content that has been submitted by publishers.

In spite of my best efforts I couldn’t get Facebook to show me any posts from this blog. Given that my posts show up in Flipboard and Zite I would guess that Facebook is the one news aggregator that isn’t scraping this blog.

That could be what is going to change next week.

This is all just speculation on my part, but given the timing I really think that I am right. Facebook is holding this event only 10 days before the Readerpocalypse, and I do not think that is a coincidence.

In any case, let’s see what happens next Thursday.

Check out the new concept smartphone with a Mirasol screen!