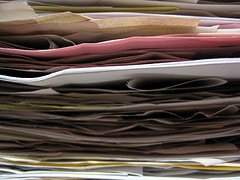 I know this is a topic I’ve covered before and that it’s a topic that pretty much everyone already has an opinion, but today I have something new. There’s a paper in the current issue of Journal of Electronic Publishing (published by the University of Michigan) on how ebooks affected book sales during an experiment.

This was an academic paper, and that raises the results from simply anecdotal evidence to well, having been published in a peer-reviewed academic jouurnal. The author of the paper worked with Deseret Books, and they made 8 titles available online for the first time.  The total cost of uploading these titles was estimated to be about a thousand dollars, and that obviously wasn’t recovered during the 10 week experiment (nor could it be).

Sales for the 10 weeks after the titles were released went up by an average of 26% more than the 10 weeks prior, with some titles seeing an increase in sales  between 30% and 78%. Curiously enough, 3 titles saw a drop in sales ranging between 10% and 39%.

It’s interesting, isn’t it, that the freebies helped some titles but hurt others. I suspect that happened because of word of mouth. One of the reasons to give away ebooks is so people can talk about the book and others might decide to buy the book. This doesn’t work so well if the quality of the book is poor.Of course, the book might also simply be outdated or unpopular right now. Of course, we already knew that. It’s a basic behavioral truism. But it is nice to have a paper (by a couple of PhDs, no less) to wave about.

Still, when the right titles are given away as ebooks, the publisher sees a minimum 30% bump in  sales. That alone should give you pause. But I’m not sure it will get attention; I suspect most will focus on the 100 thousand plus downloads.

In this case, downloads are irrelevant (except for how they affect the bandwidth costs). With the digital content the important detail isn’t the number of copies you give away; it’s how much you can increase your sales as a result.