Hearst may claim to be the most successful digital magazine publisher but when it comes to real numbers they’re not selling all that many subscriptions. So this week they decided to try something new. Hearst is going to be the first publisher to use a new early release option for the Apple Newsstand, "Read Them Here First". 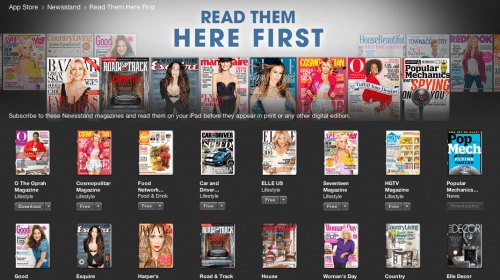 The new option popped up yesterday with no announcement from Apple or Hearst, and right now the only titles available early are 20 magazines from Hearst. Hearst’s PR dept has said that the lead time will vary between publication and the single issue sales are also included. But there’s no word yet on whether Heast’s newspapers will also be included in this offer, which is not such a big deal. I’m not sure a few hours head start will matter much for newspapers, not in this era of the 24 news cycle.

This is an interesting move on the part of Apple and Hearst. It’s a sign that Hearst has finally started to realize that there’s no reason to tie the release schedule of the digital content to that of the paper magazines. That’s a good first move towards figuring out that the digital products need look nothing like or even have the same content as Hearst’s existing print publications.

When I last covered Hearst’s limited success with digital magazines, a number of readers responded with their complaints and offered some really good explanations for why digital content subscriptions aren’t as lucrative as some had originally hoped. My readers complained of late deliveries as well as technical issues like huge file downloads packed with ads, limited formatting options (some Conde Nast titles even lacked font size options), and generally user hostile app design.

When I wrote that earlier post I thought the biggest stumbling block was how the content was bundled and sold; it turns out that readers were more bothered by the sometimes shitty apps which newspaper and magazine publishers are forcing on their readers.

Luckily all these problems can be fixed more or less at the same time; all it would take is throwing out everything they’re doing now and building a digital magazine from scratch. That is not an impossible task; just one that requires a lot of guts.