Kobo is exhibiting at IFA Berlin this week, where they revealed a radical change to their hardware plans. According to lesen.net, Kobo won’t be releasing new tablets this year and will instead be focusing on getting their apps on other companies’s hardware.

When Takahito Aiki took over for Mike Serbinis earlier this year, we knew from his reputation as a turnaround specialist that Kobo could be making some changes in pursuit of profitability. Kobo subsequently laid off 63 staff, and now they’re cutting back on their hardware investments.

Kobo Europe sales director Throsten Schroer is on the record as saying that the tablet market was "a very difficult market in which all manufacturers have to fight". This has led Kobo to decide not to replace the 3 Android tablets they launched last year, thus ending (for now) Kobo’s 3 year long experiment with Android tablets.

This move makes a lot of sense. For some time now I’ve been saying that the market is glutted with decent tablets. This has led everyone from Amazon to Google to scale back their efforts; Amazon still hasn’t leaked a 7″ tablet yet this year, and Google has only just now sent a new 7″ tablet through the FCC. 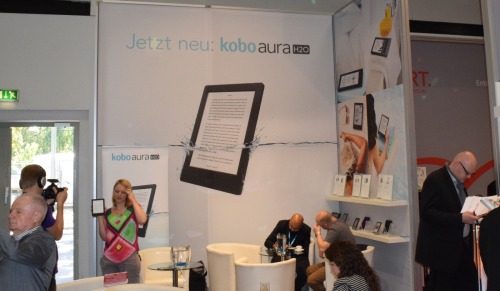 So long as Kobo had a sugar daddy, they could have ignored market trends and continued to make the huge capital investments necessary to bring new hardware to market, but now that Kobo has to become profitable that’s no longer possible.

And from the sounds of it, I don’t think Kobo is going to be launching any new ereaders in the near future, either, which means that the recently launched Kobo Aura H2O could be Kobo’s only hardware launch in 2014.

Again, that’s not such a bad idea, and it ties in with Kobo’s need to get the biggest bang for their buck. As I pointed out when I covered Kobo president Michael Tamblyn’s interview last month,  Kobo has had to be nimble and focus on areas where the big guys aren’t investing any time or money. And with the market full of budget and mid-priced ebook readers, that left one place for Kobo to go: up market, with premium 6.8″ ereaders like the Aura HD and the Aura H2O.

Is Barnes & Noble Getting out of the Hardware Business ? – Puts the Nook HD, Nook HD+ On Clearance

If Kobo wants to focus on their app they should at least make sure it has the basics – I want to choose my font, and choose the margins, line spacing, and justification. That shouldn’t be too much to ask for but it appears that it is.

It would also be nice if the app was faster in general, particularly page turning. Also, the bigger your ebook library, the slower the app works.

Isn’t this the same thing Barnes and Noble started doing and everyone was having a field day about how Barnes and Noble gave up and how they are getting out the hardware game. Lobo is doing the same exact thing focusing on their software not hardware.

I meant kobo not lobo lol

Perspective though…BN was getting out of the tablet game when tablet’s were still hot and growing. Kobo is taking a break from the tablet market when even big companies are rethinking their tablet plans..Samsung and Google.

To be fair, Kobo should stay away from tablets, I had a friend own the Vox and I had the first Arc and…well, they were less than stellar.

I don’t think B&N got out so much as they vegetated. But I do think they should have gotten out of the hardware market rather than launch a new tablet. That tablet will not sell well.

Too bad. I’ve been hoping they’d create a rugged, pocket-sized, epaper reader. Someone needs to fill that gap in the market.

[…] I reported yesterday with Kobo, most companies are avoiding the Android tablet, but luckily for this blogger that does not include […]

[…] Report: No new Kobo tablets coming this year Kobo’s instead said to be focusing on getting its app preloaded on other Android devices. Meanwhile the company continues to crank out interesting (if moderately pricey) eReaders like the new waterproof Kobo Aura H20. [The Digital Reader] […]