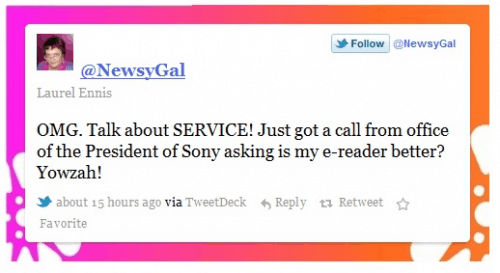 Mike Cane tipped me to the tweet above. It’s one of a pair of of tweets from a Sony Reader owner. She’s amazed by the level of service she’s received from Sony, and so am I.

This isn’t the type of service you get from a company about to exit a market. In fact, this is better service than I’ve ever seen for the Sony Reader. I’m really beginning to wonder if Consumer Reports might have been on to something earlier this week.

There was a footnote in Consumer Report’s review of the Nook Touch which mentioned an announcement coming this month which would discuss 1 or more new Sony Readers. I still don’t have anything concrete to back it up, but this is making me wonder.

But I do have an interesting bit of news, and it’s a little surprising. Yesterday I posted about a $130 Sony Daily Edition (the offer is still good). I bought one, and Sony shipped it yesterday. They didn’t just send the shipping data to FedEx; they got the package shipped less than 12 hours after I placed the order.

I selected the free shipping option, with a 6 to 10 day estimated ship time. FedEx said it would be here on Friday. Damn, that is a stunning turn-around time.

Sony are providing spectacular service for the Sony Readers. Which do you think is more likely: They’re doing this with all their products or they singled out the one market for extra attention?

Update: I’ve just come across the press release that Sony put out in connection with Pottermore, the new Harry Potter website. This release gushes about ebooks, digital content, and Sony’s role in it all. Yeah, I don’t think Sony will be getting out of ebooks after all.

I tried to buy a 950 yesterday with the coupon, but no dice, so my refurb would have been over $200, and they wanted to charge me for shipping, so I gave up. Guess the offer is only good for special folks.

Damn. Sorry it didn’t work out for you.

I ordered a 950 yesterday and was able to apply the coupon code. For some reason the code did not work initially, but it worked on the second try after I cleared the coupon code field and reentered it.

The headline is: "New Sony Readers coming soon?" but what is the news here? It seems to be about discounts for refurbed models. Is there, in fact, anything additional about new models coming?

Notice the question mark. This is a Hardware Rumor, not a report on news of a release.

[…] the Consumer Reports rumor, the sales on the new and refurbished Daily Editions, the calendar date, and now this supply […]

My Sony Pocket Edition died and I sent it back for coupon exchange (under warranty). My Office Depot store was out and I found one only in another store, which they said they would hold. They’re scarce as hen’s teeth. I hope there will be a newer model by the time my coupon gets here.