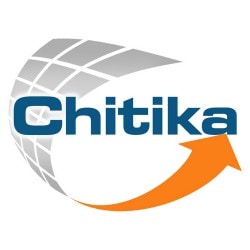 As survey after quarterly report after survey has shown, the holiday season is the prime tablet buying period in the US, with tens of millions of devices being sold in just a few short weeks.

All those tablets and smartphones changing hands mean that the holiday season is just as high stakes for device makers as it is for retailers, and Chitika has been keeping score. Chitika surveyed a sampling of devices on their ad network, and they’re reporting that Apple was the big winner in the smartphone market and that Amazon and Microsoft were the big winners among the tablet makers.

Thanks to bumper iPhone sales, Apple hardware accounted for about 2% of of the smartphone ad impressions than it did before the holiday season.  Google was the other winner, going from 0% to 0.7%, but all the other smartphones tracked by Chitika showed noticeable declines.

And in tablets, Amazon showed the biggest gain, with the Kindle Fire accounting for 9.4% of ad impressions (up 0.6%). MS also showed a healthy bump in sales, taking home a 2.3% share. And the big "loser" was Apple, who’s iPad only accounted for 76% of ad impressions (down 1.3%).

The data is based on ads served in the US and Canadian markets, and it only reflects the devices that browsed the web, and it is only based on a sampling of the ads served, and as a result it’s not a perfect view of the market. But even as an incomplete snapshot, the chart below (and the report that Chitika is selling) reminds us that Apple’s lead in tablets is slowly being nibbled away by other device makers (very very slowly).

As DisplayMate’s recent screen study showed, Apple’s competitors are getting better at a faster rate than Apple. They’re catching up with Apple’s ability to produce good tablets, and consumers are beginning to notice. Sales are shifting, and unless Apple pulls amazing tech or marketing out of their hat I expect the sales to continue to shift away from the iPad. 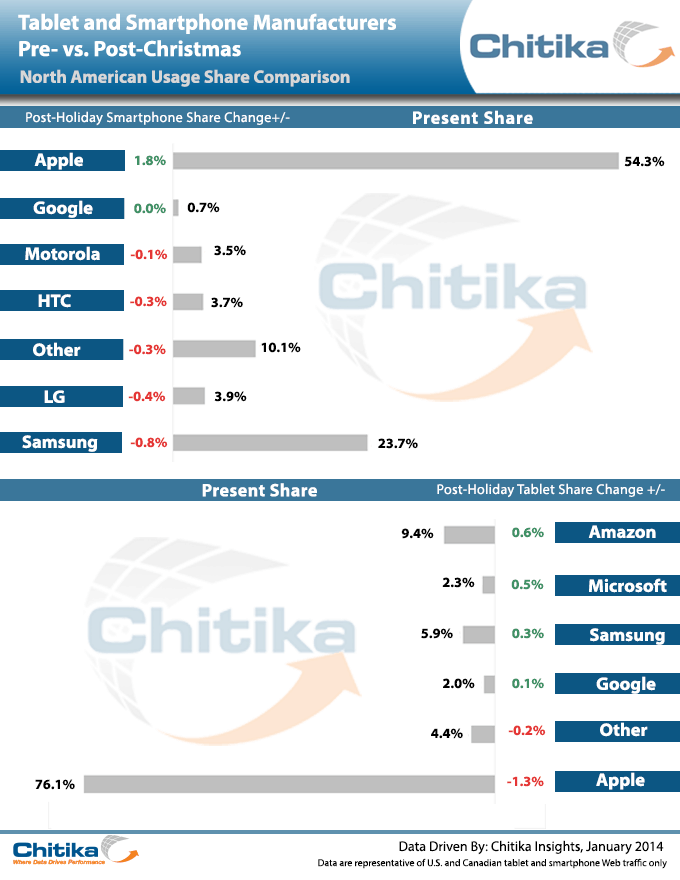 And they didn’t even have to conspire to form an illegal cartel in order to gain ground against the market leader, just produce quality products. Whodathunkit?

The limit to this survey is of course that Apple tablets are a lot easier to use for browsing web sites than Android tablets. I find my Nook a pain in the neck in that regard. But the point I’m getting at is that there are a lot of android tablets not being counted because they don’t look at web sites for that reason, or they are simply used to access Netflix. The Netflix data might actually be the most accurate state of the tablet market if you could get it, even though you would probably still find iPads used more during the day (because of the better battery life and speed of their processors).

Yep. But even the Netflix data might not be too accurate; There is an unknown quantity of low-end Android devices that cannot be used to stream content.

Agreed, but the really low end Android tablets aren’t really being used as tablets at all. They are more likely thrown in the back of the drawer somewhere. What I’m thinking is of tablets that are actively used and I bet Netflix and Amazon Prime is the main use for them (that and book reading). Of the people in our office with android tablets, very few of them use them for web browsing or email. Its netflix or other apps (feedly, NYTimes etc…).

Hard to say. Our Nexus 7 is used for e-mail, web browsing, and reading primarily by the GF (I use my phone). My grandson has a Nexus 7 as well which is primarily used for Minecraft and youtube (minecraft videos). I never watch any video longer than a couple minutes on anything but the TV, Netflix and Amazon especially. Use cases would be highly variable I would think, and I have no idea what Chitika’s ad network entails. We have had a couple iPads as well, and the only thing we found them better for is large format reading, ie magazines… of course if we had larger Android tablets they would be better as well, it’s just a size issue. Oh, and my other younger grand kids tablet is used for little kid games almost exclusively.

[…] Holiday Device Sales: iPhone and Kindle Fire Divide the Spoils (The Digital Reader) A survey by digital advertising network firm Chitika shows Apple growing its share in the expanding mobile ad impression market with 2% of ad impressions, while the Kindle Fire put Amazon on top among tablets with 9.4% — this is out of all digital ad impressions in the Chitika network. […]