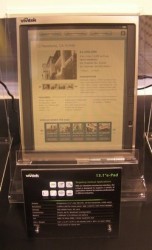 Do you recall the ereaders I showed you with Bridgestone screens? They’re not going to hit the market any time soon.

Delta spoke with Digitmes yesterday and said that “due to demand for e-book readers not being very strong recently, the company is not in a hurry to cut into the market, but will continue to observe and wait for the right time to enter.”  Delta will take the next 3 to 6 months to observe the ereader market and decide the best time to enter.

Of course, what he neglected to mention was that Delta’s ereaders, based on 8″, 13″, and 21″ Bridgestone screens, were supposed to have hit the market already. They’ve been delayed twice, so perhaps this is actually a cancellation, not another delay.

Okay, I might be reading too much into this, but I don’t think so. When a company pulls back from definitely releasing a device to thinking about releasing it, they’ve already gotten better than halfway to not releasing it.

This is both good and bad. The demo units on display at CES were under-equipped and had washed out screens, but the same screens showed fascinating potential when they showed up at an art conference and workshop in Berlin.