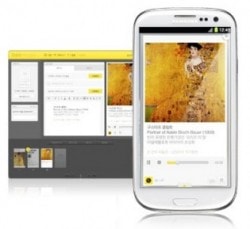 Kakao, one of the larger players in the Korean social networking field, has just expanded into a new niche. Earlier this week they launched Pages, a content market that Kakao says is the world’s first mobile distribution platform for digital content.

Kakao Page is available only in Korean for the moment, and it offers developers the chance to sell and promote music, video, images, and other types of content. None of content on Kakao Page is free, which comes as no surprise to me.

While many would assume that you need free content to draw users into a content store, Kakao already has over 70 million potential customers using their social network apps. It looks to me like Kakao plans to keep Pages as a close companion to their existing popular social media apps. Developers are likely already sharing content for free by sharing a link to where ever it has been uploaded, so there is little point in Kakao Page also hosting a copy.

One other difference between he content on Kakao Page is that the content is reportedly reviewed before it is allowed into the store. If that is handled well then it could help give Kakao Page a cachet for quality that other content stores lack.

When I first read about this new store I was convinced that it was a sign that distribution was the new bubble. Now I am not so sure. Kakao Page looks less like a “me too” type of service like Kobo Writing Life or B&N PubIt and more like a natural and sensible expansion on Kakao’s other services.

Kakao probably already has content creators interacting with fans via Kakao’s other social media apps. Offering those creators a place to sell the content (and making it easy to connect the promotion with the selling) is a logical next step.

Kakao Page is in fact the second content store launched by Kakao. There’s also the Kakao Game, a social game app store which launched last year. That store doesn’t have any free games either but developers are generating revenue.