Steven Troughton-Smith has got me to thinking about the Dell Venue 8 Pro tablet. And when I ruminate about something, I mentally replay all that I’ve seen and read in my head.

And what popped up with a flag in my replay was this: 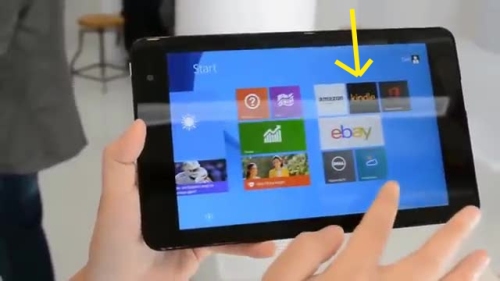 That’s the Kindle app. Already on the Dell Venue 8 Pro. And that led me to the incredibly stupid thing Amazon has been doing.

About a year ago, I fondled a bunch of Asus hardware at their unveiling event.

And that’s when I wrote about Amazon’s incredibly stupid thing too:

I couldn’t try the Kindle app because it wasn’t prepared with a demo account.

I don’t know what will happen with that when demo units are in stores. I’ve already read that the Kindle app stinks, but I’d like to see that for myself and I think most buyers would too.

This just makes no sense at all.

If I go into a Staples, I can try out a Kindle just fine, seeing sample eBooks: 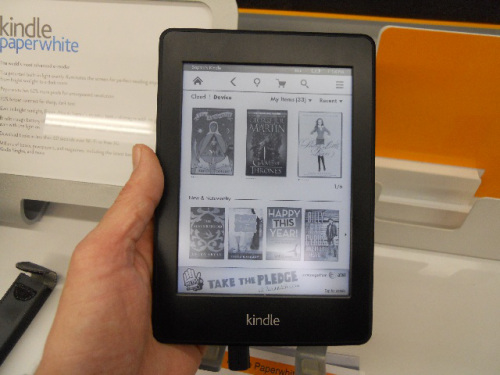 Why should the Kindle app that’s pre-installed on any tablet act differently?

Why isn’t it possible for Amazon to ship the app with either a demo mode or a demo account sign-in mode?

As much as Amazon wants everyone to buy one of their Fire tablets, not everyone will.

And guess what? The Kindle Store doesn’t give a damn if people buy a Fire tablet or not. The Kindle Store just wants to sell more Kindle books. And that’s exactly how Amazon is structured. There is — forgive the word — synergy, but each business is still its own business.

Yet this incredibly stupid thing Amazon is doing with the Kindle app on other tablets — as well as phones and PCs — is thwarting the aim of the Kindle Store.

It shouldn’t be this way.

But they have been doing this incredibly stupid thing.

It’s time to stop doing that.

And I don’t want to hear how this is impossible or difficult or WTF. You know why?

Because Google Play Books can do it.

Here I am fondling the first-generation Samsung Galaxy Note at an AT&T store last year, with a book called up from Play Books: 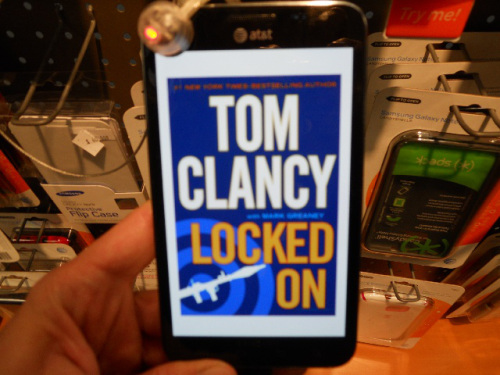 If Google Play Books can manage to do that, so can Amazon.

Get on it, Amazon!