(FCC, benchmarks) over the past few months have suggested that Samsung was going to launch a tablet that was even cheaper than the $139 Galaxy Tab 3, and it looks like those rumors have been confirmed.

The Polish language version of Samsung’s website is showing a leaked user manual and other docs for the Galaxy Tab 3 Lite, and there seems to be confirmation from a Polish retailer that this tablet is coming soon.

Update: Samsung has issued a belated press release and confirmed many of the details in the previous leaks. There’s no mention of a price, though.

The Galaxy Tab 3 Lite is aiming to be a cheaper competitor to the Kindle Fire HD.  It runs Samsung’s version of  Android on a dual-core 1.2GHz CPU with 1GB RAM, 8GB Flash storage, a microSD card slot, Wifi, and Bluetooth.  Toss in the screen resolution of 1024 x 600 and you basically have the same tablet as the $139 Galaxy Tab 3, but these tablets are actually quite different.

According to the Polish retailer the Galaxy Tab 3 Lite is going to be available in Wifi and 4G models. They’re saying that the retail will be 499 Polish zloty for the Wifi model, or about $163 USD. Given that the Galaxy Tab 3 can be had for $139, that seems a little high.

Because Samsung already has a budget tablet which sells cheap, so the new one is bound to be cheaper. Furthermore, it fits with Samsung’s past behavior.

Samsung has been targeting the 7″ Galaxy Tab models as competitors to the Kindle Fire ever since that tablet launched in late 2011. The Galaxy Tab 2 launched in April 2012 with a price tag of $249. That cost more than the then-new Kindle Fire, but it was at least within shouting distance of Amazon’s tablet. And then in April 2013 Samsung released the Galaxy Tab 3 with (I think) a $169 price tag, making the Tab 3 competitive with the $159 second-gen Kindle Fire. 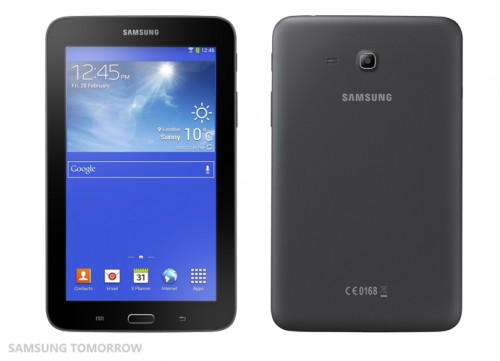 I happen to have a Galaxy Tab 3 on my desk at the moment. I picked it up on Saturday at Best Buy for $139 – the same price as the second-gen Kindle Fire HD.  While it’s a very nice tablet, it’s not the hands-down best value for $139. But it is still a safe purchase from an established tablet maker. And with 9 hours battery life, it does offer a good value for the price.

But I am not so sure that the Galaxy Tab 3 Lite will be an equally good value. We’ll have to wait for the first reviews before we’ll know for sure.