The ebook reader market might be withering in the US but there are still signs of life elsewhere in the world. The Brazilian publisher/bookseller Saraiva has just launched a couple new ereaders to compliment their ebookstore.

The new Lev ebook readers both have a 6″ HD E-ink screen with a resolution of 1024 x 758 and a touchscreen. They run Bookeen’s custom Linux OS on a 1GHz CPU with 4GB internal storage, a microSD card slot, and Wifi. They support a number of ebook formats, including ePub, PDF, HTML, TXT and FB2 formats, and aside from one small difference (the more expensive model has a frontlight) these are effectively the same device.

They are rebranded devices originally developed by Bookeen, the French ebook company, and compared to cutting edge devices like the Tolino Vision or the Pocketbook Ultra the Lev models are rather unimpressive. Luckily what the Lev lack in specs they make up for in value.

The more budget priced Lev ereader costs 299 reais, or about $131 US dollars, while the premium model adds a frontlight and costs 399 reais, or about $175.Both models are available now on the Saraiva website, and they will be carried in its 100 plus retail stores. 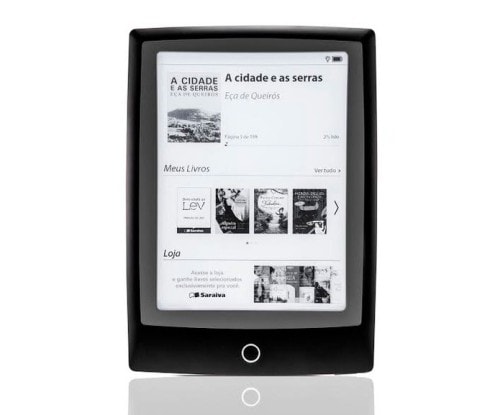 While these prices might sound expensive compared to the US market, where one can get the Kindle Paperwhite for less, in the Brazilian market the prices are quite competitive. The cheaper Lev costs the same as what Amazon is charging for the basic Kindle in Brazil, and the more expensive model is priced to match the Kindle Paperwhite.

This suggests to me that even though Saraiva is competing in an ebook market against Apple, Amazon, Google, and Kobo, but they’re not one to back down from a fight.

Saraiva has long been a force to be reckoned with in Brazil. They’ve been investing in their ebookstore and online operations since long before Amazon, Google, and Kobo launched local bookstores in Brazil, both by building a platform and by pushing for more books to be converted. Saraiva has its own reading apps for Android and iOS, and it has expanded its catalog to nearly half a million titles, including 30,000 titles in Portuguese.

From the outside it would appear to be a strong local contender, and in the past this has led to speculation that Amazon might buy Saraiva’s online operations. That never happened, and given Saraiva’s investment in ebook reader hardware I don’t expect that the deal will occur.