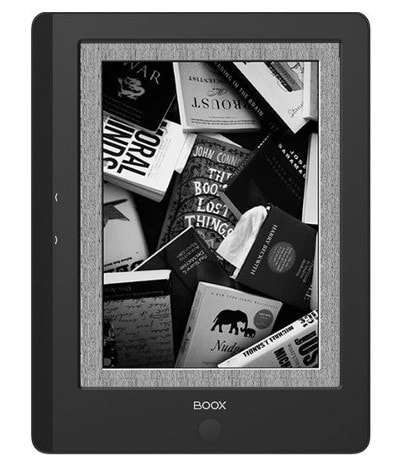 First teased around this time last year, the Boox i86 has proven to be an elusive device. The closest it has come to reaching the market is a limited beta test in China, but now some helpful person has started selling it on Ebay and Amazon.

If you’re interested in getting an unreleased and possibly incomplete ereader which runs Android, now’s your chance. Earlier this week a single unit popped up on Amazon.com (and was quickly snapped up by yours truly), but there are still multiple units available on Ebay, where it is selling for $249.

According to the official specs, the Boox i86 runs Android 4.0 on a 1GHz CPU with 512MB RAM and 4GB internal storage. It has Wifi and Bluetooth, and there’s also a microSD card slot and a headphone jack. The 8″ Pearl E-ink display has a screen resolution of 1,200 x 1,600. The touchscreen is IR, but there’s no frontlight.

Compared to the Pocketbook 840, another 8″ ereader on the market, the Boox i86 isn’t a very good deal, but the detail about Android 4.0 holds out the hope that we might be able to add more reading apps.

But is this seller legit? I’m really not sure.

I’ve tried to get an i86 from Onyx, and was told it wasn’t available. But I also know that the i86 is being sold in limited numbers in China (I’ve been following the discussions among beta testers), so this could well be a seller who bought the i86 in China and had it imported into the US.

I won’t know for sure until I get home on Saturday and can open the unit I bought off of Amazon. A cautious buyer would wait, but if you want to take the risk you can still get a unit on Ebay.

In all honesty, I would recommend waiting for the official release. I’m expecting this ereader to ship with a frontlight, but even if it doesn’t have one the official models will likely have more polished software than what is currently running on the beta units (we don’t even know if it supports English).