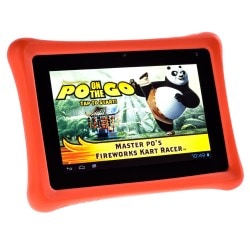 For the past 6 months the kid’s tablet maker Fuhu has been offering a great $5 a month content subscription service called Nabi Pass, and yesterday they went one better.

Rather than charge you $5 a month for all the kid-friendly videos, ebooks, apps, and games you can watch, Fuhu wants to throw in the tablet as well. The WSJ reported on Tuesday that Fuhu has launched the Nabi Pass Tab service.

The Nabi Pass Tab service bundles the Nabi 2s tablet, a 7″ tablet which retails for $133 on Amazon. It runs a custom version of Android 4.2 on a Tegra 3 quad-core CPU with 1GB RAM, and 16GB internal storage. It also has Wifi, Bluetooth, NFC, and a 2MP front-facing camera.

Thanks to the protective shell, the Nabi 2S weighs 1.32 pounds and measures 1.14″ thick. That makes it a pretty solid tablet which weighs a lot more than average (Amazon’s competing kids tablet weighs around 12 ounces).

In terms of content, the service packs in a cornucopia if educational content as well as movies, games, and ebooks. There’s content from the likes of Nick Jr, Disney, National Geographic, and Cartoon Network. And of course Fuhu’s own Wings educational apps are also included.

And you get all that for $10 to $15 a month, making it a good option for parents who can’t afford to pay upfront. Fuhu co-founder and president Robb Fujioka told the WSJ that he came up with the subscription idea after taking a look at sales data which showed that many parents were putting tablets on lay away. “There are a lot of families out there that can’t handle the upfront cost of getting a tablet for their kids,” he said. 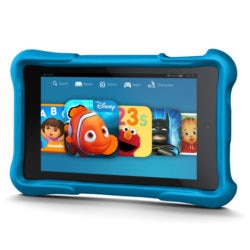 All in all, this is a good deal, but it’s not necessarily the best deal.

As you may recall from last month, Amazon offers a kids tablet in 6″ and 7″ sizes. Those tablets come bundled with a two-year warranty and a one-year subscription to Freetime Unlimited, Amazon’s alternative to Nabi Pass.