Do you remember that time when you learned that a certain website has auto-play videos when it sounded off in the middle of an important phone call?

Google has a fix. Last year Google blessed us with a speaker icon  for tabs so we can see which tab is making noise, and now Google is giving us the option to kill the audio on a single tab: 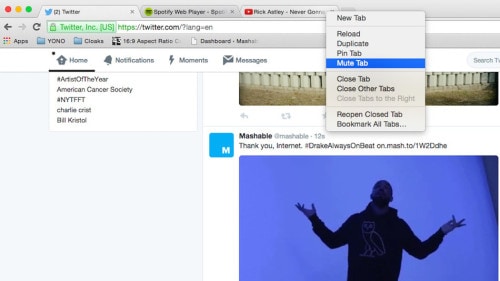 You’ll need the latest version of Chrome to get this feature, and you can check which version you’re running in the “Help and About” menu.

This change had come as something of a surprise, given that Google had previously said that it would not let Chrome control content in this manner.  Chromium evangelist François Beaufort posted this explanation on Google+ last year:

After much debate, we decided not to proceed with a tab mute control, as this crosses a very important line: If we provide Chrome controls for content, we’re implying that Chrome should take on a responsibility to police content.

Today, users are (rightfully) mad at misbehaving content for doing things like auto-playing annoying ad audio, but they should continue to pressure web site authors to change this behavior. Also, some have pointed out that there is already a mute button to the right of the audio indicator (the “X”). In all seriousness, note that many web pages will register onClose() events to monitor when users leave their site. Thus, closing the tab will be a very strong signal to the web sites that their annoying ads are scaring all their users away!

He has a point; this is basically a concession that Chrome has to rescue users from recalcitrant web publishers who aren’t going to reform their behavior.

I think the better option would be to close the tab, which is what I plan to keep doing whenever I encounter annoying auto-play video.

In fact, now that I think about it I don’t expect that I will ever use this feature. It is much easier to find and press the mute button on my laptop (the F1 key) than it is to scramble to find and silence the one noisy tab.

That almost makes this a pointless feature, doesn’t it?