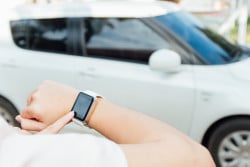 The stand-out feature of Apple’s 40-year rise to become the world’s largest public company has been its ability to convert ideas into designs that have redefined consumer products. It is astonishing that the iPhone only arrived in 2007 but, in less than a decade, has helped redefine communication, computers, music and the internet.

But just as the PC age transitioned into the mobile computing market, we are now seeing the start of a shift to the era of the “Internet of Things”. What is the future for Apple as the focus shifts from computers in our pockets to computers in all the objects around us, from our buildings to our transport to our kitchen appliances?

The greatest sales growth in Apple’s history came in 2015 but we’re already seeing the mobile and tablet markets mature. Apple’s latest releases – the iPhone SE and the iPad Pro – are really just variations on existing products. When a company runs out of new countries to expand into and its new products are just there to fuel replacement sales, it can expect to see less and less growth.

The technology market is a fickle and fluid world, new devices and solutions can often come from new directions that disrupt products and services. While the PC and mobile market has become a connected cloud of content and apps – such as Apple’s iCloud online storage system and Siri voice recognition program – this design is now shifting into “connected objects and things”.

“Internet of Things” has become a broad term covering “what is coming next”. This is a move to connect 50 billion objects or more into a new era where individual cars help plan a city’s traffic management and fridges automatically order more food for you when you run out.

We’ve already seen the beginning of this movement with the advent of wearable devices that track your fitness levels and allow you to make contactless payments. But Apple’s entry to this market, the Apple Watch, has made far less of an impact than previous new launches. Its first connected device for the home, Apple TV, has had similarly limited success.

Apple has also introduced developer software to allow other manufacturers to connect their home appliances (HomeKit), medical and fitness devices (HealthKit) and even cars (CarPlay) to the company’s technology. But these things remain underdeveloped – early market rather than mainstream.

Can Apple replicate its success?

Apple’s success has been based on redefining existing products, but when it comes to new technology markets it has little to no track record. While Apple Watch and Apple TV are potentially leading products in their markets, they still aren’t radical compositions of technologies that can produce the kind of popularity and “wow factor” we saw with the iPhone and iPad. Even with the firm’s reported move into driverless cars or other possible difficult, high-risk “moon shot” projects, the question remains whether it can create a critical mass for the new category of connected computing.

The other issue for Apple is that the Internet of Things involves connecting many different types of products, appliances and content services from not just one company but potentially hundreds, including rival system manufacturers. This differs significantly from Apple’s previous “walled garden” approach that has involved working with app developers, but making core technology incompatible with that of competitors – right down to its charging cables. The question is whether the firm’s home, health and car development platforms will also remain closed to rival companies, preventing customers from picking and choosing from different systems.

With its past record, the expectation of Apple is sky high. But even the enormous funds of US$160 billion that the company is sitting on – more than the GDP of many small countries – is no substitute for creativity and genius. I believe Apple will be able to position itself at the vanguard as the market moves past this latest inflexion point. But having your own walled garden may not be enough when consumers and enterprise want a multiple-connected experience.

reposted under a CC license from TC

View posts by Mark Skilton
Mark is a Professor of Practice, University of Warwick. His research interests are in technology ecosystems around defining value and monetization; multi-channel operating model strategies; data standards, governance and compliance, and visualization strategies.